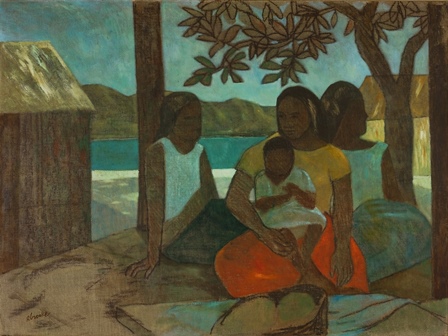 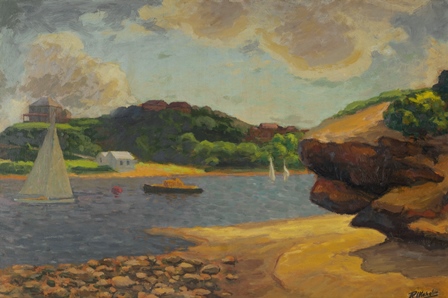 One of our best ever sales, with over 350 lots. Highlights include a quality private collection from Melbourne featuring several major Ray Crooke canvases, and a large Sydney water view by Roland Wakelin.

From a Sydney collector, some fascinating William Dobell material including the artist’s diary of his journey to London as recipient of the 1929 Society of Artists travelling scholarship. Starting somewhat serendipitously from Annandale, Dobell relates his experience of ship life, as well as ports of call in Colombo, the Suez and Cairo.  Dotted through with original sketches, newspaper clippings and even pressed flowers, the narration concludes with his ultimate destination of London, and the Slade School. From the same collection, a working sketch of the famous (or infamous) 1943 Archibald Prize winning portrait of Joshua Smith, unsigned, but stamped with the Dobell Foundation seal.

From a Tasmanian collector, a wonderful group of traditional works including works by William Beckwith McInnes, Harley Griffiths, John Loxton, Percy Leason and others.

From the NSW Central Coast, two excellent and large Donald Friend works on paper including “Forest Hermit,” and “Sayang,” both signed and inscribed ‘Bali’.
Either would be a standout work in the collection of one of his enthusiasts.

Melbourne artist Bill Coleman is represented by five works gifted by the artist to the current owner’s grandmother. Elsie Young took up painting at the age of 70, and formed a close and enduring friendship with the artist, her instructor. Repatriated from London, a good collection of works on paper by several  Australian modern masters to include several Fred Williams figure studies, Whiteley and Bill Robinson editions, and three original Charles Blackman ink drawings from the 1950s.

From another Sydney collector, two more large Blackman works on paper, and an excellent indigenous collection of both established and emerging aboriginal artists. A large Sally Gabori canvas is the highlight, with numerous other works by Naomi Hobson (also with the Mornington Island provenance), Kudditji Kngwarreye (several), and an impressive large work by Galya Pwerle amongst many others.

We are also pleased to offer a work by the iconic Emily Kngwarreye
as another feature of our indigenous section.

All in all, a large and varied catalogue with numerous gems dotted throughout. 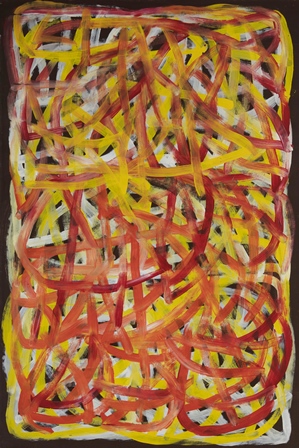